This chocolate travel story is a tiny, excited, anxious tale of discovery.

Thanks to Emily Stone of Chocolate In Context, who I saw on the Origin Chocolate Event Amsterdam.

....Wandering around the tropical building, I overheard the words between a chocolatier and an eager customer "chocolate in Guatemala." Wait! I thought with a surge of excitement and even a rush of jealousy, that's my story. I made my way to the front of the queue and discovered the high voltage Belgian chocolatier Geert Vercruysse presenting an entire range of ganache-filled bon bons highlighting the chocolate of small artisan producers around the world including in addition to Marou, Pacari, Dick Taylor, and Taza——Danta chocolate from Guatemala! Vercruysse's Danta bon bons—made of nothing but Carlos Eichenberger's chocolate mixed with sweet cream—tasted like cherries dipped in caramel. The cacao came from a farm on Guatemala's Pacfic coast called Las Acacias, an old family finca on a swath of land near once dominated by the United Fruit company, which I had also visited in 2008... 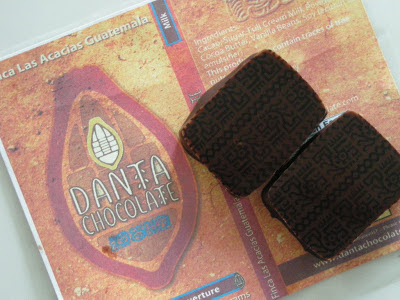 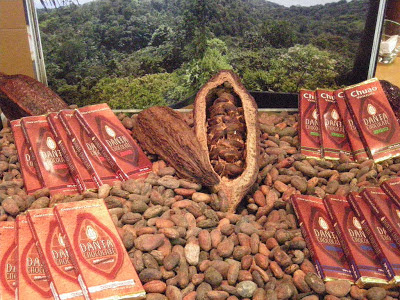 A new discovery made. I can't say who ultimately discovered whom in this story. But this is a story to tell: Guatemalan cacao becomes Belgian chocolate.

(Starting in November new Danta bars, made from organic cacao grown in Guatemala's neighboring country of Nicaragua, should be available at Chocolatl in Amsterdam and in Kortrijk, Belgium.

The complete story of Emily Stone and Chocolate in Context follow next link:
http://chocolateincontext.blogspot.be/2012/10/discovering-danta-chocolate-guatemala.html