Similarity between the terms "cacao" and "cocoa" often creates confusion. The U.S. Food and Drug Administration defines cacao as "the bean which is the source..." of chocolate products such as cocoa powder, chocolate liquor or cocoa butter, depending on how the cacao bean is processed. Thus, the cacao bean is the source of both cacao and cocoa powders, and though the terms often are used interchangeably, subtle differences exist between the two. 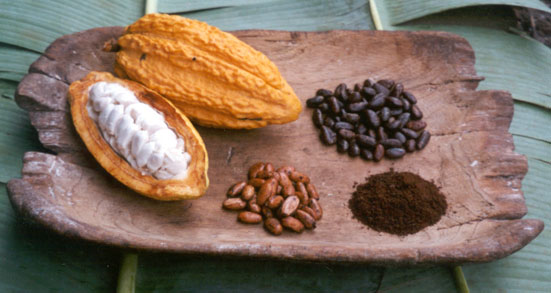 History
The Mayan empire began cultivating and harvesting cacao more than 2000 years ago, and the Aztecs used whole raw cacao beans as their main form of currency.

The Mayans used the beans to create a spicy drink enjoyed by royalty and consumed during religious ceremonies. Without access to sweetening spices, cacao was consumed as a strong, bitter beverage. After the Spanish conquistadors invaded Mexico, they sent back shiploads of cacao beans, where it was mixed with sugar and cinnamon to make a drink that was popular among the upper classes.

Charles Linnaeus, creator of the modern scientific naming system, named the cacao bean "theobroma," which translates to "food of the gods." Today, chocolate is one of the most popular flavors in the world.

Cacao Beans
A cacao bean consists of a brown to greenish hard shell filled with tiny pockets called nibs. These edible nibs are the flesh of the cacao beans. One bean contains between 12 percent and 60 percent fat, and zero sugar.

Cocoa Powder vs. Cacao Powder
Pure, unsweetened cocoa powder tastes very bitter and rich, which is why it is most often used in sweets and confections. To get cocoa powder from the cacao bean, the nibs are first ground into a strong paste. The fat is removed, and the remaining solids are ground up again into a fine dust: cocoa powder. Because of its drying properties, using cocoa powder in a cake often requires the use of more shortening or butter in the recipe.

According to FDA guidelines, cocoa powder and cacao powder are simply different terms for the same powder, and are nearly interchangeable; however, "cacao powder" specifically refers to raw, unsweetened powder. "Cocoa powder," on the other hand, may still have a very small amount of cocoa butter present to enhance the flavor subtly.

Cocoa Butter
Cocoa butter is the last component of the cacao bean and is created first by crushing the nibs to obtain chocolate liquor. The remains are pressed to separate the solids from the fat, leaving butter with a subtle cocoa taste and aroma. Cocoa butter is sometimes mixed with milk and sugar to make white chocolate. 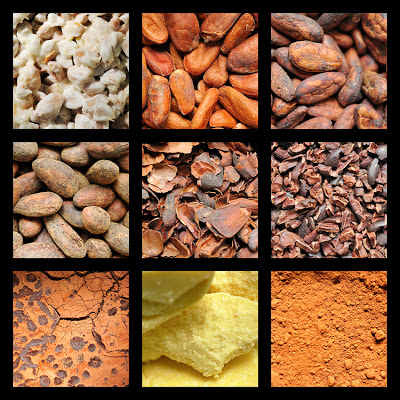