CACAO CULTURE IN THE PHILIPPINES. part 5 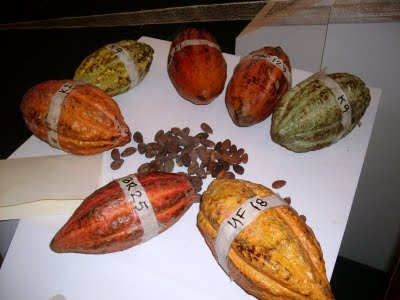 CULTIVATION.
Planters are united in the opinion that pruning, cutting, or in any way
lacerating the roots is injurious to the cacao, and in deference to this
opinion all cultivation close to the tree should be done with a harrowtooth
cultivator, or shallow scarifier. All intermediate cultivation should
be deep and thorough, whenever the mechanical condition of the soil will
permit it. A plant stunted in youth will never make a prolific tree; early
and continuous grawth can only be secured by deep and thorough cultivation.
Of even more consideration than an occasional root cutting is any injury,
however small, to the tree stem, and on this account every precaution
should be taken to protect the trees from accidental injury when
plowing or cultivating. The whiffletree of the plow or cultivator used
should be carefully fendered with rubber or a soft woolen packing that
will effectually guard against the carelessness of workmen. Wounds in
the bark or stem offer an inviting field for the entry of insects or the
spores of fungi, and are, furthermore, apt to be overlooked until the injury becomes deep seated and sometimes beyond repair.
With the gradual extension of root development, cultivation will be reduced
to a narrow strip between the rows once occupied by the plantain
or the abaca, but, to the very last, the maintenance of the proper soil conditions should be observed by at least one good annual plowing and by as
many superficial cultivations as the growth of the trees and the mechanical
state of the land will admit. 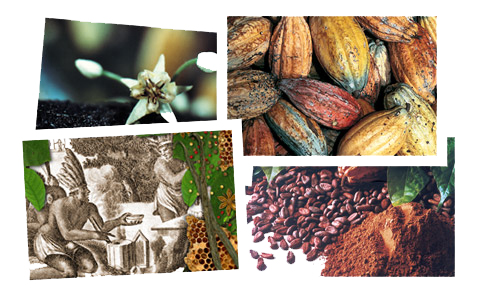 PRUNING.
When left to its own resources the cacao will fruit for an almost indefinite time. When well and strenuously grown it will bear much more
abundant fruit from its fifth to its twenty-fifth year, and by a simple
process of renewal can be made productive for a much longer time.
A necessary factor to this result is an annual pruning upon strictly
scientific lines. The underlying principle involved is, primarily, the fact
that the cacao bears its crop directly upon the main branches and trunk,
and not upon spurs or twigs; secondly, that wood under three years is
rarely fruitful, and that only upon stems or branches of five years or upward does the maximum fruitfulness occur ; that the seat of inflorescence
is directly over the axil of a fallen leaf, from whence the flowers are born at irregular times throughout the year.
With this necessary, fundamental information as a basis of operations,
the rational system of pruning that suggests itself is the maintenance of
as large an extension at all times of straight, well-grown mature wood and
the perfecting of that by the early and frequent removal of all limbs or
branches that the form of the tree does not admit of carrying without
overcrowding.
It is desirable that this extension of the branch system should be lateral
rather than vertical, for the greater facility with which fruit may be
plucked and possible insect enemies fought: and on this account the
leading growths should be stopped when a convenient height has been
attained. 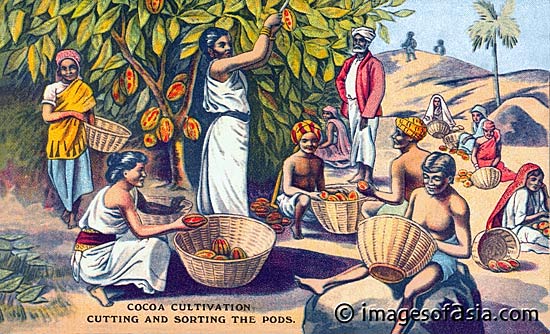 When well grown and without accident to its leader, the cacao will
naturally branch at from 1 to from the ground. These primary
branches are mostly three to five in number, and all in excess of
three should be removed as soon as selection can be made of three strongest
that are as nearly equidistant from each other as may be. When these
branches are from . to long, and preferably the shorter distance, they are to be stopped by pinching the extremities. This will cause them and the main stem as well to "break", i. e., to branch in many places.
At this point the vigilance and judgment of the planter are called into
greater play. These secondary branches are, in turn, all to be reduced as
were the primary ones, and their selection can not be made in a symmetrical
whorl, for the habit of the tree does not admit of it, and selection of
the three should be made with reference to their future extension, that the
interior of the tree should Tiot be overcrowded and that such outer
branches be retained as shall fairly maintain the equilibrium of the crown.
This will complete the third year and the formative stage of the plant.
Subsequent prunings will be conducted on the same liQes, with the modification
that when the secondary branches are again cut back, the room
in the head of the tree will rarely admit of more than one, at most two,
tertiary branches being allowed to remain. When these are grown to an
extent that brings the total height of the tree to 3 or , they should be cut back annually, at the close of the dry season. Such minor operations as the removal of thin, wiry, or hide-bound growths and all suckers suggest themselves to ever}^ horticulturist, whether he be experienced in cacao growing or not. When a tree is exhausted by overbearing, or has originally been so ill formed that it is not productive, a strong sucker or "gourmand' springing from near the ground may be encouraged to grow. 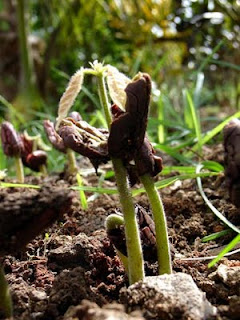 By distributing the pruning over two or three periods, in one year the old
tree can be entirely removed and its place substituted by the "gourmand.''
During the third year flowers will be abundant and some fruit will set,
but it is advisable to remove it while small and permit all of the energy
of the plant to be expended in wood making.
From what we know of its flowering habit, it is obvious that every operation connected with the handling or pruning of a cacao, should be conducted with extreme care ; to see that the bark is never injured about the old leaf scars, for to just the extent it is so injured is the fruit-bearing area curtailed. Further, no pruning cut should ever be inflicted, except with the sharpest of knives and saws, and the use of shears, that always bruise to some extent, is to be avoided. All the rules that are laid down for the guidance of the pruning of most orchard trees in regard to clean cuts, sloping cuts, and the covering of large wounds with tar or resin apply with fourfold force to the cacao.
Its wood is remarkably spongy and an easy prey to the enemies ever lying in wait to attack it, and the surest remedies for disease are preventive ones, and by the maintenance of the bark of the tree at all times in the sound condition, we are assured that it is best qualified to resist invasion. Of the great number of wormriddled trees to be seen in the Archipelago, it is easy in every case to tracé the cause to the neglect and brutal treatment which left them in a condition to invite the attacks of disease of every kind. 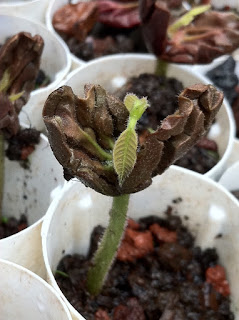