Diseases are the biotic factor with the greatest impact on cacao production in Latin America and the world.
In Central America, bacteria, viruses and nematodes do not cause significant problems; instead, fungi and similar organisms are responsible for most of the losses.
Moniliasis (caused by the fungus Moniliophthora roreri) is the disease that causes the most damage in this region and it is responsible for up to 80% of losses of cacao fruits or pods and the abandonment of many cacao plantations.
Next in importance is black pod disease, caused by organisms of the genus Phytophthora, previously classified as fungi but currently grouped with the Kingdom Protistas. Black pod can attack different parts of the plant but, like moniliasis, it mainly damages the fruits that contain the product of commercial interest: the cacao seeds.
After a brief introduction to the factors associated with the incidence of cacao diseases, the first part of this publication focuses on the two main diseases that affect cacao fruits: moniliasis and black pod.
The emphasis is on the identification of these diseases, this catalog includes photographs of the most characteristic symptoms of the diseases and signs of the fungi. It also provides information about the reproduction and dispersal of their causal agents, life cycles and the measures recommended for controlling them.

The second part of the catalog focuses on diseases that mainly attack parts of the plant other than the fruit, emphasizing their recognition and control.
Finally, this publication contains information about witches’ broom, a serious disease present in South America, the Antilles and areas to the south of the Panama Canal,
which threatens to spread into Central America.
Technicians and farmers should learn to recognize the different symptoms and signs of this disease.

When diseased fruits are not cut off in time, the fungi can complete their life cycle, producing millions of spores (the seeds of the fungi), ready to infect the healthy fruits.

In a well-managed, properly pruned cacao plantation, as shown in the photographs, more light can enter, humidity is lower and there are fewer attacks by diseases.
In addition, the trees flower more readily and this favors the production of fruits 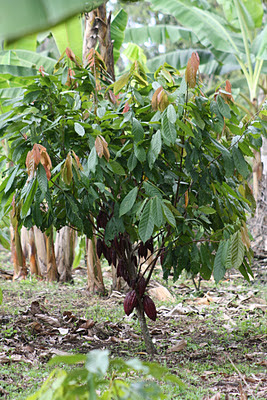 Main fruits diseases
Moniliasis (frosty pod rot)Caused by the fungus Moniliophthora roreri:
This disease only attacks the fruits or pods of cacao (Theobroma cacao) and close relative ssuch as the pataste (T. bicolor) and the cupuaçu (T. grandiflorum), causing several types of
symptoms that may occur alone or in combination with others. Sporadically, fruits appear healthy but they are already damaged internally and can be recognized by their heavier
weight.

How does the fungus reproduce?
A white “fuzzy” layer formed by minuscule interlaced threads of mycelia appears on the brown spots.
This layer darkens as millions of tiny spores are produced and mature. The spores, which are the seeds of the fungus, detach when they are dry, forming a floury dust.

How does the fungus reproduce?
The spores are carried to healthy fruits by the wind or by splashing raindrops, or they are spread by being stuck to animals or humans. When the surface of the fruit is damp, the spores germinate and infect it.
The damage is visible several weeks later. Young fruits less

than three months old are most commonly attacked.