CACAO CULTURE IN THE PHILIPPINES. part 7

ENEMIES AND DISEASES.
Monkeys, rats, and parrots are here and in all tropical countries the
subject of much complaint, and if the plantation is remote from towns or
in the forest, their depredations can only be held in check by the constant
presence of well-armed hunter or watchman. Of the more serious enemies
with which we have to deal, pernicious insects and in particular
those that attack the wood of the tree, everything has yet to be learned.
Mr. Charles N. Banks, an accomplished entomologist, now stationed at
Maao, Occidental Negros, is making a close study of the life history of
the insect enemies of cacao, and through his researches it is hoped that
much light will be thrown upon the whole subject and that ways will be
devised to overcome and prevent the depredations of these insect pests.
The most formidable insect that has so far been encountered is a beetle,
which pierces and deposits its eggs within the bark. When the worm
hatches, it enters the wood and traverses it longitudinally until it is ready
to assume the mature or beetle state, when it comes to the surface and
makes its escape. These worms will frequently riddle an entire branch
and even enter the trunk. The apertures that the beetle makes for the
laying of its eggs are so small -more minute than the head of a pin-
that discovery and probing for the worm with a fine wire is not as fruitful
of results as has been claimed.
Of one thing, however, we are positively assured, i. e., that the epoch of
ripening of the cacao fruit is the time when its powerful fragrance serves
to attract the greatest number of these beetles and many other noxious
insects to the grove. This, too, is the time when the most constant and
abundant supply of labor is on the plantation and when vast numbers of
these insects can be caught and destroyed. The building of small fires
'at night in the groves, as commonly practiced here and in many tropical
countries, is attended with some benefits. Lately, in India, this remedy
has been subject to an improvement that gives promise of results which
will in time minimize the ravages of insect pests. It is in placing powerful
acetylene lights over broad, shallow vats of water overlaid with min eral oil or petroleum.
Some of these lamps now made under recent patents yield a light of dazzling brilliancy, and if well distributed would doubtless lure millions of insects to their death.
The cheap cost of the fuel also makes the remedy available for trial by every planter.
There is a small hemipterous insect which stings the fruit when about
two-thirds grown, and deposits its eggs within. For this class of insects
M. A. Tonduz, who has issued publications on the diseases of cacao in
Venezuela, recommends washing the fruit with salt water, and against
the attacks of beetles in general by painting the tree stem and branches
with Bordeaux mixture, or with the vassiliere insecticide, of which the
basis is a combination of whale-oil soap and petroleum suspended in lime
wash. There can be no possible virtue in the former, except as a preventive
against possible fungous diseases; of the sanitive value of the
latter we can also afford to be skeptical, as the mechanical sealing of the
borer's holes, and thereby cutting off the air supply, would only result
in driving the worm sooner to the surface. The odor of petroleum and
particularly of whale-oil soap is so repellant, however, to most insects that
its prophylactic virtues would undoubtedly be great.
The Philippine Islands appear to be so far singulax'ly exempt from the
very many cryptogamic or fungous diseases, blights, mildews, rusts, and
cankers that have played havoc with cacao-growing in many countries.
That we should enjoy continued immunity will depend greatly upon securing
seeds or young plants only from noninfested districts or from
reputable dealers, who will carefully disinfect any shipments, and to supplement
this by a close microscopical examination upon arrival and the
immediate burning of any suspected shipments.
Another general precaution that will be taken by every planter who
aims to maintain the best condition in his orchard is the gathering and
burning of all prunings or trimmings from the orchard, whether they are
diseased or not. Decaying wood of any kind is a field for special activity
for insect life and fungous growth, and the sooner it is destroyed the
better.
On this account it is customary in some countries to remove the fruit
pods from the field. But unless diseased, or unless they are to be returned
after the harvest, they should be buried upon the land for their
manurial value.
﻿﻿﻿ 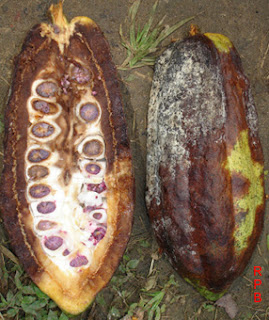 ﻿﻿﻿
The picture above was taken in Ghana, where fortunately, beans may sometimes be extracted from pods showing disease sypmtoms on the outside - unlike Moniliophthora diseased pods
(see below). 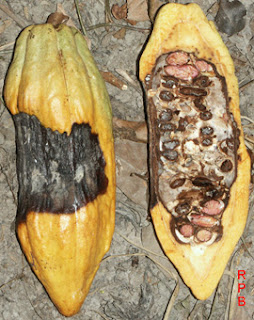