CACAO CULTURE IN THE PHILIPPINES. part 3 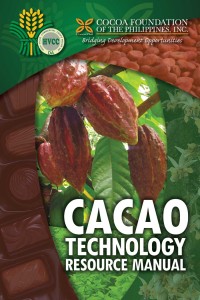 THE PLANTATION.
Cacao, relatively to the size of the tree, may be planted very closely.
We have stated that it rejoices in a close, moistnre-laden atmosphere, and
this permits of a closer planting than -would be admissible with any other
orchard crop.
In very rich soil the strong-growing Forastero variety may be planted
apart each way, or 745 trees to the hectare, and on lighter
lands this, or the more dwarf-growing forms of Criollo, may be set as
close as or rather more than 1,000 trees to the hectare.
The rows should be very carefully lined out in one direction and staked
where the young plants are to be set, and then (a year before the final
planting) between each row of cacao a line of temporary shelter plants
are to be planted. These should be planted in quincunx order, i. e., at the
intersecting point of two lines drawn between the diagonal corners of the
square made by four cacaos set equidistant each way. This temporary
shelter is indispensable for the protection of the young plantation from
wind and sun.
The almost universal custom is to plant, for temporary shelter, suckers
of fruiting bananas, but throughout the Visayas and in Southern Luzon
I think abaca could be advantageously substituted. It is true that, as
commonly grown, abaca does not make so rank a growth as some of the
plantains, but if given the perfect tillage which the cacao plantation
should receive, and moderately rich soils, abaca ought to furnish all necessary shade.
This temporary shade may be maintained till the fourth or fifth year, when it is to be grubbed out and the stalks and stumps, which
are rich in nitrogen, may be left to decay upon the ground. At present
prices, the four or five crops which mjy be secured from the temporary
shelter plants ought to meet the expenses of the entire plantation until it
comes into bearing.
In the next step, every fourth tree in the fourth or fifth row of cacao
may be omitted and its place filled by a permanent shade tree.
The planting of shade trees or "madre de cacao" among the cacao has been observed from time immemorial in all countries where the crop is grown, and the primary purpose of the planting has been for shade alone.
Observing that these trees were almost invariably of the pulse or legume family, the writer, in the year 1892, raised the question, in the Proceedings of the Southern California Horticultural Society,
that the probable benefits derived were directly attributable to the abundant fertilizing microorganisms developed in the soil by these leguminous plants, rather than the mechancial protection they afforded from the sun's rays.
﻿ ﻿
﻿
To Mr. . Cook, of the United States Department of Agriculture,
however, belongs the credit of publishing, in 1901,' a resume of his inquiries into the subject of the shades used for both the coffee and the
cacao, and which fully confirmed the previous opinions that the main
benefit derived from these trees was their influence in maintaining a constant supply of available nitrogen in the soil.
That cacao and its wild congenors naturally seek the shelter of wellshaded
forests is well established; but having seen trees in these Islands
that were fully exposed at all times showing no evidences of either scali,
burn, or sun spot, and in every respect the embodiment of vigor and
health, we are fully justified in assuming that here the climatic conditions are such as will permit of taking some reasonable liberties with this time-honored practice and supply needed nitrogen to the soil by the use of cheap and effective "catch crops, such tis cowpeas or soy beans.
Here, as elsewhere, an Erythrina, known as "dap-dap," is a favorite
shade tree among native planters; the rain tree (Pithecolohium saman)
is also occasionally used, and in one instance only have I seen a departure
from the use of the Leguminosse, and that in western Mindanao, there is
a shade plantation composed exclusively of Cananga odorata, locally
known as ilang-ilang.
﻿﻿ ﻿﻿

THE PLANTATION.
While not yet prepared to advocate the total exclusion of all shade
trees, I am prepared to recommend a shade tree, if shade trees there must
be, whose utility and unquestioned value has singularly escaped notice.
The tree in question, the Royal Ponciana (Poinciana regia), embodies
all of the virtues that are ascribed to the best of the pulse family, is easily procured, grows freely and rapidly from seed or cutting, furnishes a minimum of shade at all times, and, in these Islands, becomes almost leafless at the season of maturity of the largest cacao crop when the greatest sun exposure is desired.
The remaining preparatory work consists in the planting of intersecting
wind breaks at intervals throughout the grove, and upon sides exposed
to winds, or where a natural forest growth does not furnish such a
shelter belt. Unless the plantation lies in a particularly protected valley,no plantation, however large in the aggregate, should cover more than 4 or unbroken by at least one row of wind-break trees. Nothing that I know of can approach the mango for this purpose. It will hold in check the fiercest gale and give assurance to the grower that after any storm his cacao crop is still on the trees and not on the ground, a prey to ants, mice, and other vermin.
﻿
Source: S.LYON,IN CHARGE OF SEED AND PLANT INTRODUCTION. OF PUBLIC PRINTING 1902.WILLIAM S. LYON
﻿http://blog.worldcocoafoundation.org/2007/11/meeting_with_cacao_farmers_in.php
Gepost door Geert Vercruysse