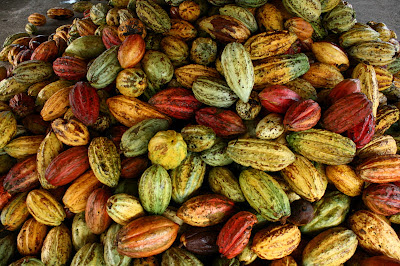 The cocoa originates from the basin of the Amazon, in the areas covered between Colombia, Ecuador, Peru and Brazil, because here is where found a greater diversity of species.
By its origin and genetic characteristics, the cocoa is classified in four type: Criollo, Forastero, Trinitario, Amazon and national Ecuador. In addition there are Clones of cocoa.

Criollo cocoa.
They are trees relatively low and less robust with respect to other varieties.His Cup is round with small leaves of green, oval-shaped clear and thick. Almonds are ivory white.
This type of cocoa is characterized by elongated ears green and reddish colors in immature State, yellow tornandose and reddish orange when they are mature, obtained from this cocoa chocolate is enjoyed by the taste of nuts and fruit. Commercially it is framed within the fine cocoas.

Amazon forasteros cocoa.
They provide 80% of the world production. Called Amazon because they were distributed in the basin of the Amazon River and its tributaries.Ears are green (immature State) and yellow (when they are mature), shaped like a small bottleneck at the base.Almonds are flattened and small, with purple cotyledons.This type of cocoa is a chocolate flavored cocoa basic. 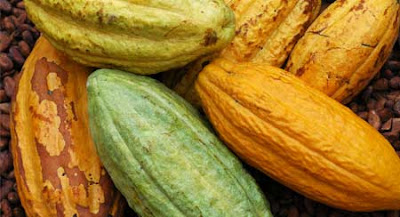 Trinitarian cocoa.
It is the result of crossing between the cocoa Criollo of Trinidad and multiplied outsider type
in the basin of the Orinoco River. Its quality is intermediate. Its name were selected in Trinidad and hence. These supply the 10 to 15 per cent of world production. The cocoa that is most grown in America. There are cocoa flavor from medium to high, usually flavored with fruits and nuts.

National cocoa Ecuador.
It has similar characteristics to the outsider Amelonado type. However there are few pure plantations of this dominating plantations product of natural interbreeding with materials brought from Venezuela and Trinidad, complex national Trinitario cocoa denominandose. Ears are amelonadas, but chokes on the base and apex of the same, with shallow ridges and furrows. The internal color of almonds is pale violet or lilac, although sometimes white seeds are observed. This type of cocoa is one of the best chocolates in the world for its taste and floral aroma, combined with profiles of fruits and other flavors.

Clones.
Clones.Finally, also you can find Clones, i.e. varieties produced by the man who
they are usually identified with letters and numbers from your research, as it is the case of the CCN-51, a material that currently covers a part of the plantations in the Amazon. They are reddish purple and reddish-orange when mature.
They have low medium to cocoa flavor. Its potential lies in the production of cocoa butter. 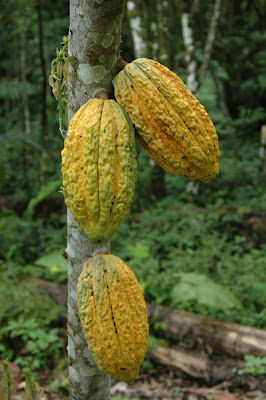