Cacao was first used to prepare various drink types as far back as 3,000 years. During these early times, when the Olmecs and Maya took trees from forest gatherings to domesticate in their areas of influence, it appears they predominantly chose what is now known as the Criollo (Kree-O-yo) type of cacao tree. 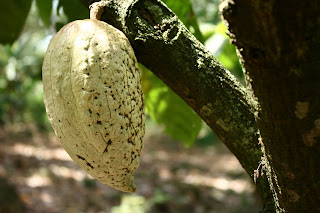 However, we have no way of really knowing except for the locations of some very old trees, multi-generations from those plantings.
Today, because cacao proliferates naturally in South American jungles, several types of Criollos and natural Criollo crosses exist. While each cross may be slightly different from another, Criollo types all share characteristics such as the pale white cotyledons, the round bean shape and the complex yet mellow flavor. Unfortunately, Criollo trees produce few pods and are very susceptible to disease. As a result, there remain only few areas of the world, namely in Venezuela, Madagascar and Java, where pure or mainly Criollo crosses can be found. 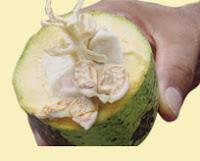 E. Guittard Ambanja 65% Cacao Bittersweet Chocolate is made from cacao beans from Madagascar which have a predominantly Criollo genetic make up. Because Criollo beans are so light in color, even a bittersweet chocolate made from this bean type is fairly light in color. If you are shown a Criollo chocolate that is very dark, maybe it isn't Criollo at all.
FORASTERO
Starkly different from Criollos, Forastero type cacao trees were selected and introduced by Spanish farmers, actually estate holders, as any farmer would, by looking at the wild population for an indication of their productivity. 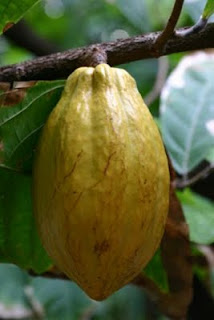 Forastero trees are hearty, disease resistant and very prolific, and so unlike the delicate, less economical and now rare Criollos, Forasteros have flourished. Forastero trees today generate roughly 90% of our world cocoa supply and are grown in cacao growing regions throughout Latin America, Asia and Africa. 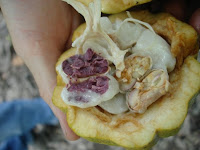 When opened, Forastero beans are easily recognized by their dark purplish cotyledons and flat-shaped beans.
Forastero is also often characterized by strong chocolate flavors. The rarified Nacional Forastero, grown in north-central Ecuador, is known in particular for its powerful yet floral notes. 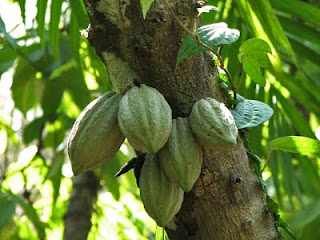 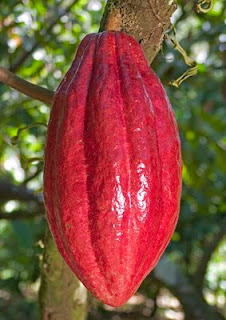 A third variety of cacao called Trinitario is really just a natural cross between the Criollo and Forastero varietals and was created essentially by accident. In the early eighteenth century, vast numbers of the disease-prone Criollo trees were killed off by a blight that spread through most of Latin America.
In order to bolster the dwindling supply of cacao in

Trinidad, more cacao trees were brought to the island. When the new trees, which are thought to have been Forasteros from the Orinoco River Delta area of Venezuela, crossed with the remaining local Criollo trees, the Trinitario varietal was born.
Recognizable by their pinkish interiors, Trinitarios are heartier and more productive than pure Criollos. They also have the potential to combine in flavor some of the complexity of Criollos with the flavor intensity of Forasteros.
E. Guittard Sur del Lago 65% Cacao Bittersweet Chocolate is made from Venezuelan beans of naturally mixed Criollo and Trinitario heritage from that region.