I’m somewhat taken with Thomas Gage’s “Travels in the New World“, as much for its place in history as the first English-language book on Mexico as its  notoriety (among those of us who are students of such things) for setting so many of the stereotypes and the anti-Mexican biases that underlie most English-language books about Latin America.
Born about 1597 into the English Catholic gentry, at a time when religion was — like economic theories in the 20th century,– something nations killed each other over and tortured their own people for holding the wrong opinion about.
In England the religious fights were particularly nasty, with a Catholic Queen burning Protestants at the stake, followed by a Protestant Queen who did unto the Catholics as they had done unto the Protestants.  And, to make things even worse, the Puritans — sort of the religious “teabaggers” in that they were protesting the Protestant establishment, attacking the Church of England as still too Papist. 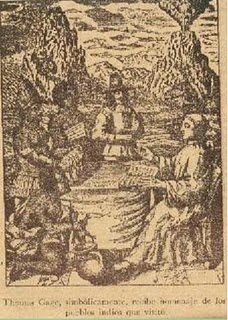 From the 1645 Edition, graphic from Alex Engel's Guatemalan website, Enchiel (enchiel.blogspot.com)
Thomas and his brothers were sent to France as boys to study under the Jesuits, with the goal of returning to England as Jesuit missionaries and undercover agents for the Catholic Church.  Thomas,  for unknown reasons — though given that Catholic priests caught in England were subject to having their guts ripped out, their arms and legs chopped off AND hanged (in that precise order) before they were killed, it’s not hard to figure out his reluctance to buy into the paternal plan — skipped off to Spain when his education was completed to become a Dominican monk.

Claiming he was drunk at the time (or rather, was convinced by a monastic drinking buddy), he signed on to a mission to the Philippines in  1624.  The real reason seems to be that English Dominicans in Spain were also being sent to England — and his father had disowned him when he’d skipped out on the Jesuits.  Sent to Mexico for basic training before heading to Manila, and having second thoughts about heading further (and not wanting to be sent back to England), he went AWOL from the Filipino Dominicans.  Fleeing his missionary superiors, he eventually ended up in Guatemala where priests (especially those like Gage, who was a Latin scholar) were hard to come by, and where runaway would-be Manila-bound clerics weren’t unusual — the local Dominicans regularly dealt with the situation by arranging for retroactive reassignment of their AWOL Filipino clerics.

By scamming, scheming and squeezing his Mayan and Spanish parishioners in first Mixco and later Amatitlán over the next sixteen years, Gage amassed a sizable fortune.  He slipped away, overland to  Nicaragua, Costa Rica, across the straits of Darien to Portobello — then the largest city in Panama.  Then, as now, Panama was a natural hangout for all manner of rogues and pirates.  In 1637 — in good part thanks to those pirates, Gage  made his way back to Europe, thence to England where he reinvented himself (or, who knows, maybe actually converted) to Puritanism.
As a defector, he proved his value by turning in a number of Catholics and secret priests (including his own brother, who was ripped, shredded and hanged) and — like many a defector since, made a good living writing and lecturing on the evil ways of his former controllers.   This was enough to get him into the good graces of the Puritans, who having overthrown the monarchy, found Gage a more appealing job than the Puritan preacher of a country church, taking him into the government as the Spanish-Main adviser to  Oliver Cromwell’s “Protectorate”. 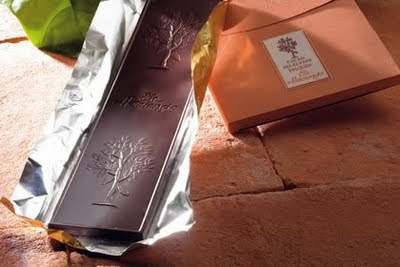 Hispaniola from Felchlin
Gage was responsible for the English attempts to conquer Hispaniola (today’s Dominican Republic and Haiti) in 1655 and the successful invasion of Jamaica, where Gage died in 1656.  Originally, he was pushing Cromwell to invade Guatemala — something rejected because the English had better naval than land forces, and islands were more their style).  And why Guatemala?  Revenge — or a desire to wreak vengeance on former colleagues   probably played some part — but a bigger reason was that Gage simply wanted to drink chocolate again before he died.
Chocolate is indigenous to Mexico and Guatemala and — at the time — unknown outside of Spain except for Spanish-controlled parts of Italy and some of Holland (Dutch pirates having figured out what the English threw overboard thinking it was cow manure really was).  Gage’s one positive act in history (besides writing an entertaining, if scurrilous, book) was introducing England to chocolate. 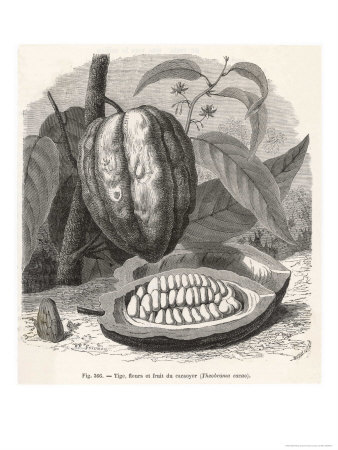 The guy was obsessed with chocolate, devoting not just an entire chapter of “Travels in the New World” to the preparation and what he believed were the medicinal and health benefits of chocolate, but — at every chance he got — throwing in a chocolate-flavored incident into his story.  A bon-bon, if you will.