Chicken or turkey in chocolate sauce may sound strange but you should try this classic Mexican recipe. Mole is a deliciously spicy sauce made according to family recipes passed down from generation to generation. The word mole is derived from the Aztec word molli for sauce and the recipe is a true blend of New and Old World ingredients: pre-Hispanic staples and spices introduced by the Spaniards, which were combined with artistry in the convent kitchens of the Colonial period. Spanish diarists of the day such as Antonio de la Ciudad Real and Fray San Pedro Sebastian talk about visits to convents and monasteries and the dishes featuring native fruits and nuts, European spices, chicken or turkey served up by the innovative sisters and monks. 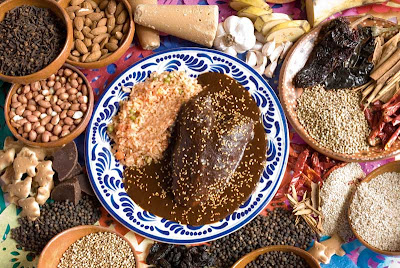 ﻿
History tells us that mole originated in the Santa Rosa Convent in Puebla in the 17th century. The story goes that Sister Andrea de la Asunción blended chocolate, chili, sesame seeds, cinnamon, almonds, peanuts, garlic and pepper among other ingredients, to create a sauce that she served with turkey to honor the visit of the Viceroy.

﻿﻿ ﻿ Another version of the story attributes the dish to another monastery and to divine intervention. Juan de Palafox, Viceroy and Archbishop of Puebla announced that he would be visiting his diocese and dining with the monks. The head cook, Friar Pascual was nervous and began to berate his assistants about the mess in the kitchen. He hastily piled all the spices, nuts, seeds, stale tortillas and chilies lying on the counter onto a tray and was carrying it to the pantry when he tripped and went flying, spilling everything into a pan full of turkey simmering away for the visitors. Fearing that he had spoilt the meal, he began to pray, and to his amazement the accidental dish turned out to be a great success. To this day, Mexican cooks often ask for his help, saying “San Pascual Bailón, atiza mi fogón,” literally, St. Pascual Bailón, bless my kitchen.
There are now countless variations on the original recipe in Puebla, Oaxaca, Hidalgo the state of Mexico and beyond and an October Mole Festival in San Pedro Atocpan (October 2 – 24), a town on the outskirts of Mexico City, which produces most of the mole spice paste consumed in the country. Up to 500,000 people are expected to attend the festival in 2010 and the organizers hope that the art of making mole will soon be recognized as a World Heritage tradition by UNESCO.