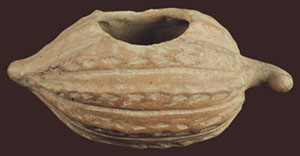 Ancient Mayan and Central American chocolate pots may be dated well before the Common Era. Logic would suggest that the earliest chocolate pots in Europe would have been introduced first to Spain, and then into nearby France. But the earliest European chocolate pots identified were, in fact, English, and not French. Earliest English chocolate pots were ornamented with family crests, handles commonly made of wood, and set at a 90 degree angle from the pouring spout, to differentiate them from silver teapots. European porcelain, independent of Asian techniques, produced chocolate pots with floral decorations that were larger and more detailed than Asiatic designs. Asian-source chocolate pots were widely produced in Japan and China, with the primary export market being Europe (across the Pacific to Mexico, then overland, to Vera Cruz, and subsequent transshipment to Europe). American chocolate pots manufactured from 1900-1950 were highly variable. The key finding, however, was that chocolate pots, like any art form, reflect history, and the history of this art form is disappearing in 20th and 21st century North America and Europe, as chocolate pots manufactured after 1950 are relatively uncommon, perhaps because drinking chocolate became passe as coffee and tea became more popular beverages globally. Sadly, there has been a shift from decorated chocolate pots to an era of the coffee mug and in more recent times the stress and focus on coffee in North America contributed to the demise of the chocolate pot art form.

Title: Role of Trade Cards in Marketing Chocolate During the Late 19th Century.

Trade cards advertising chocolate shed light on both the distribution and consumption history of chocolate in America. As one of the earliest media for direct advertising, trade cards document the rising use of color printing for promotional purposes during the last third of the nineteenth century. The content of the cards offers a wealth of information about how chocolate was "pitched" and how it was to be used by consumers. Based on trade cards in the collection of the American Antiquarian Society in Worcester, Massachusetts, and the Grossman Collection in Point Richmond, California, this chapter outlines a richly-illustrated interpretive essay exploring the function of trade cards in the marketplace, the visual language of the imagery on the front and the import of instructional literature on the back of the cards.